As I have grown older, I have developed a great love for swans. I first realized this when I started jogging round Inverleith pond early every morning, when the world was quiet, still, and the sun to the east had not yet heaved itself above the countless spires and towers still silhouetted against Edinburgh’s magnificent skyline. At first, there were twenty of them that lived on the pond throughout the year. For some time, I wondered what it was about them that appealed to me so much until I realized that, apart from their long acknowledged beauty and gracefulness, it was because they reminded me so much of humans. They were so nosy, so curious and so hopeful as they loitered hopefully around at the edge of the pond, or steamed — like a line of white battleships in formation — to be first to arrive when someone appeared with a bag of bread at the other end of the pond. Yet they were so silent, even when one of them, chased by another, heaved itself like a Concord into the air with a flapping of huge white wings before, using its two feet as breaking gear, it would land with a huge scoosh on the opposite end of the pond.

Attending, for the first time, Modern Greek evening classes also increased my love for swans. For over four decades I had been often been going to different Greek islands, where I had picked up a smattering — albeit ungrammatical — of Greek. Now, in a belated realization that I loved that country and its cerulean seas, dazzling white villages and yellow and blue caiques more than anywhere I have ever been to, I thought it was time to tackle the language and learn it seriously. As a result, I became increasingly interested in Greek mythology, where I found the myth of Cycnus — the root, of course, of the English word ‘cygnet’ — especially fascinating. According to one account, he was the son of Poseidon, who had been abandoned by his mother, Calyce or Scamandrodice, on a deserted seashore, until he was rescued by fishermen who named him Cycnus ‘swan’ because they saw a swan flying over him. According to another, he was said to have unusually white skin and fair hair, which was why he received the name ‘swan’. Whatever, when he grew up, he supported the Trojans in the Trojan War, during which, because he was invulnerable to spear and sword attack, he killed a thousand Greeks, according to Ovid, and became a Trojan hero. Then, at last, Achilles leapt ashore and throttled him, before his father, Poseidon, transformed him into a swan.

One spring, two of the swans, which had nested in thick clumps of reeds at the far end of the pond, had five cygnets, and I would pause to watch as they paddled furiously after their parents at the first sign of danger. Soon I felt quite proprietorial towards them; they were so vulnerable and such easy targets for the voracious sea-gulls which hovered hopefully overhead, ready to snatch any cygnet foolish enough to stray beyond the protective beaks of its parents. Then, sure enough, one day I was saddened to notice that there were only four cygnets, but over the next few months I would watch as they grew bigger and bigger and their feathers changed from grey, to brown to white, until they were no longer ugly, grey-feathered helpless little creatures but transformed into the fully fledged, elegant swans that we know so well, and love so much, from ballets such as ‘Swan Lake’.

At the same time I watched as two bad-tempered swans would chase after all the others, snapping at them with angrily with their yellow beaks. At first, their behaviour so annoyed me that, had they been humans, I would have remonstrated with them for such bullying behaviour. However, one day, next to a sign saying ‘Do not feed the swans white bread’, another sign suddenly appeared, warning passers-by that adult swans with cygnets could be very aggressive. It was only then I realized the two swans must be the parents of the cygnets. 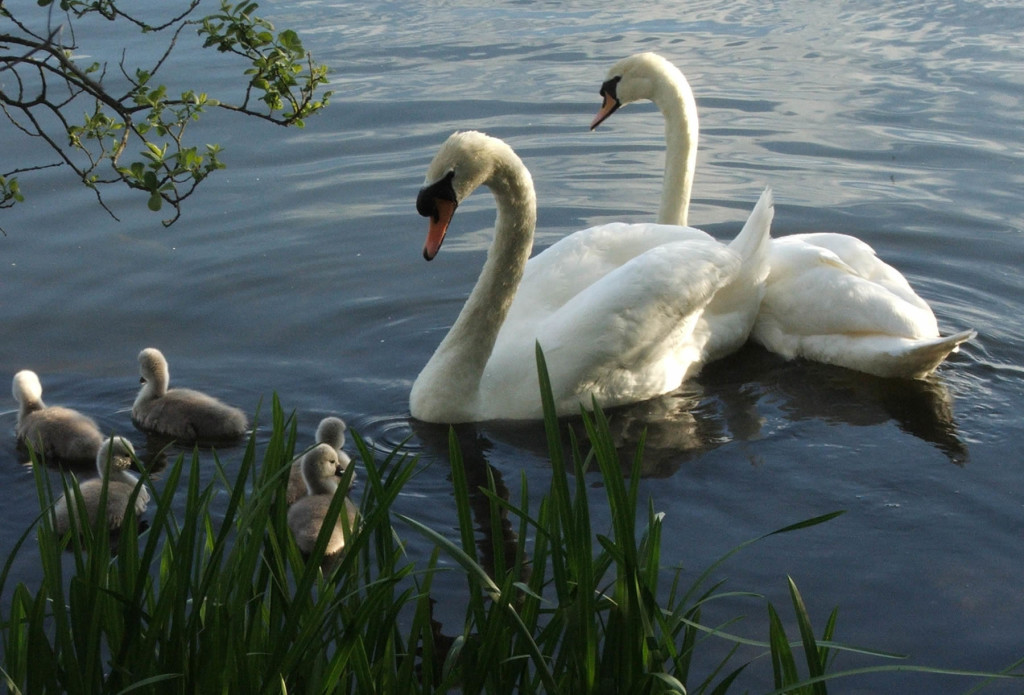 They were astonishing to watch; though there were only two of them, they would steam furiously, their necks coiled like irate cobras and wings arched threateningly, across the pond to intimidate the other swans congregated for safety at the other end of the pond, before they chased them out the water. Once the flock had hastily clambered onto dry land, the two swans would sail back to the clumps of reeds at the other end, until the rest of the flock dared slip back into the water. Then the two swans would once again steam fiercely across the pond and the whole procedure would be repeated once more, leaving me wondering how only two swans could intimidate such a large flock.

After I damaged my hip and could no longer go running, I continued going to the pond every lunchtime, although this time on my bicycle on my way for a coffee at nearby Fettes Health club. Once again, I would watch them as they glided imperiously through the water or waddled round the edge of the pond, to gobble at grass, hiss malevolently at foolish dogs, and even eat from the tentative, outstretched hands of children. Then, to my dismay, their number, worn down by the on-going aggression of the two swans, began to slowly but surely diminish, until there were ten, then eight, then six, then only three left — the two swans, and a fully grown cygnet. However, one Saturday, to my delight, a new flock of swans suddenly arrived from out of the blue. Looking for a new home in which to spend the summer, they were obviously unaware of the reputation of the two swans, but after spending the afternoon being chased out of the pond, the next day they had gone.

Now there are only the three swans left — I have since learned that the council rehoused the original flock to the pond next to Linlithgow Palace — and Inverleith pond, to me, looks forsaken and forlorn. Of course, on a sunny day, the water still glitters like myriads of sparkling emeralds, and querulous seagulls and quacking ducks still float around lazily like toys in a enormous bathtub, but I am left to nurse my feelings of enormous loss and regret, along with my memories of how the pond was once graced by those most elegant of creatures, which reminded me so much of a crowd of reincarnated souls, and what I would like to be when I die.